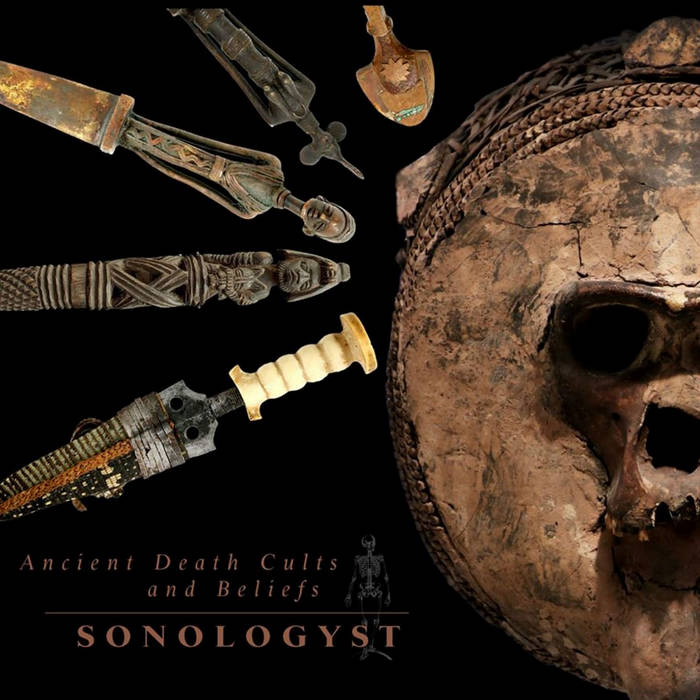 darkcasey Ancient Death Cults and Beliefs is a fascinating album, each track having its own unique way of slipping some death spirituality into your day. If you like your music questing and a little jarring at times, you should check it out. Favorite track: Popol Vuh.

frannymac It’s difficult to pick a favourite album in the jewel chest that is Sonologyst’s catalogue, because every piece is so strong, unique and well crafted. This latest offering, however, is possibly ‘the one’ for me. In places it is utterly hair-raising.
All music and soundscapes from Sonologyst seem to have a deep, primordial quality to them. Raffaele’s work hits the spot like nothing else. Highly recommended listening for those willing to take an experimental trip to dark, ancient thresho

Jonathan Outstanding dark ambient soundscapes with aspects of psychedelic horror. With its singular exploration of dark drone aural geography, this immersive sound frightens,entertains and transports the listener to nether realms. Highly recommended for those who do not fear the dark drone. Favorite track: Ceremony.

Purple Crow Ra is a fascinating artist of delightfully rare explorations and someone worth knowing. These sounds are as raw as they are purposeful. Like a reforming faction of surviving people post collapse who have remained true to their beliefs and gods, this album expresses these same sentiments and is a soundtrack for these historical moments. Unique, bizarre, yet somehow familiar to a sensitive mind. Be as aware of this album as you are aware of the potential reality. :>

some kind of alice

The veneration of the dead plays an important role in mythology and (nature) religions. It is inspired by fear for wrath of the deceased, and by obtaining their council and favors. A large part of the religious life concentrated therefore around the death cults. This led to the erection of huge monuments (mastabas, pyramids, grave-temples, and rock-graves) in Egypt. But also in ancient China, Mesopotamia, and India the dead were honored by impressive monuments and elaborate rituals. Although the death cults and burial rituals may be different among the nature religions, the reasons are the same; either affection towards the deceased or else fear for the soul wandering in the vicinity of the corpse and which must be appeased (with offerings, prayers, incantations). Common is also a form of cannibalism where the body is eaten in order to obtain some of the strength of the deceased.
The mummification of the dead, which originated in the belief of life after death, was an important part of the death cults too.
This album is an investigation, on music side, of those cults and beliefs in ancient times.

"Sure, it is dark and mysterious; it is atmospheric and sometimes noisy. But, for example, in 'Primeval Source' there is a soprano saxophone, played by Paulo Chagas, and that gives the music another dimension… I very much enjoy the mixture of styles that Sonologyst offers. He uses some fine set of field recordings, rustling like leaves in 'Puragtorium' or the wooden percussive sounds of 'Anubia, House Of Dead Prince', the mixture of synthesizers and digital processing (in 'Ceremony' most present) and the slow, minimal development he uses in his music… Sonologyst paints a fine musical story with these sounds" (Vital Weekly)

Many thanks to Justin Mitchell, Paulo Chagas, Frans Kedes, Dadang Dwi Septiyan, for their special contributions and trusting the project.

More than simply being an album, Sonologyst’s (from Naples) Ancient death cults and beliefs is, as said by himself, a novel told in music, a complex and detailed analysis upon the topic of the veneration of the dead people according to the point of view of those civilizations always studied upon history books, sometimes more superficially, sometimes not.
There aren’t so many cases in which the artists dedicate themselves to the documentation, in music, of the ancient Egypt and the Maya civilization-related topics, to make a couple of examples. Sometimes these civilizations are discussed to build dystopic constructions, maybe as an excuse to focus upon the “end of the world” topic or upon an imaginary alien race arrival on Earth. At the bottom of this five-songs album there’s the interest to document (the will, in a certain manner, to let the listener participate to never lived or imagined history periods), so far from our postmodernist civilization.
The main topic here is about a civilization in which the ritual dimension have been really important and in which the divinities have played a primary role as far as the social order was concerned. The album requires, then, to close our eyes and to put on our headphones to try to catch the smaller hints, to let us go into the history of these civilizations, delivering us a true history page. The music style chosen is, of course, ambient, approached in its softer as well as in its darker variations, interpreted in a particularly “physical” way, far from stylistic and distant genre exercises.

The album title is exemplar: what and which are the ancient death cults and the relative beliefs of the civilizations talked about in the album? The gods were particularly important, feared and honored, and the veneration of the dead persons brought to the construction of various kinds of buildings and monuments and to the fulfillment of various kinds of ritualistic practices. The reasons were the fear towards the divinities and, obviously, the manifestation of affection toward dead persons, let’s think, for example, at the pyramids, to make a concrete example.

Let’s descend into the depths of history and let’s analyze this work in a greater detail. It have to be said that the more interesting songs are, maybe, the longer and the more suggestive ones, Purgatorium and Anubis, House of dead prince, but all of them are perfectly made and have their own personality. The first of these two measures eleven minutes while the second measures fifteen minutes, and this second one is the masterpiece of the album, but let’s begin from the starting point. Ceremony is one of the more catchy episodes, standing between ambient and IDM, a long, evocative, cinematic song which seems to transport us within a dark and mystical crypt, that seems to push us to participate to a sort of ceremony related to the veneration of the dead persons, a ceremony of which we don’t know the development.

Our movie goes on with the long and already mentioned Purgatorium, a long series of dark tunnels in which, if you close your eyes, you can listen to the Frans Kedes’s synthesized sounds and vocals, it can be possible to feel that mixed sense of claustrophobia and illusion that seems to give us the choice to touch the history with our hands. The noises here have a really important weight and let us “be there”, in the purgatory in which the dead souls stand waiting for an hypothetical safety.

Primeval science shortens the length and throws to the composition a dark shade (veiled but present/absent), built thanks to Paulo Chagas’s saxophone soprano, afterwards processed by the artist, and thanks to the footsteps noise which becomes a sort of rhythmic.

The following Popul vuh is shorter and concentrate itself upon the famous Maya book, some parts of which were used during funeral rites, continuing to walk through cinematic ambient OST-like landscapes.

As said before, Anubis, House of dead prince is the closing episode, the keeper of the dead persons world, a divinity of primary importance, which “character” and his myth arrived until our present times. As far as the composition is concerned, this is both the quintessence of the entire Sonologyst’s work and the longest, complex and the most huge episode. Here we have the Dadang Dwi Septiyan’s percussions and the Chagas’s clarinet bass. It almost seems that the divinity itself would show us the world of which he’s the keeper, so that the dark ambient, along with a particularly mystical atmosphere brings us to the discovery of a distant and unreal (but rich of pathos) world. At the end of the trip, the listener remains satisfied but incomplete, as if the album could have been on and on…but we’ll let explain the artist’s following release what will follow it.

This is an album that demands the listener the right atmosphere and a pair of good headphones. If you want to deepen the understanding of these ancient cultures through a different medium, the musical one, this is the perfect album for you. Tidy in its details, suggestive, atmospheric and cinematic. You gotta try it.

Bandcamp Daily  your guide to the world of Bandcamp

Featured sounds from Fly Lo and Ahmed Idris, plus Mother Nature hops on to drop off new project